From Aliya Skeptic to Aliya Bully 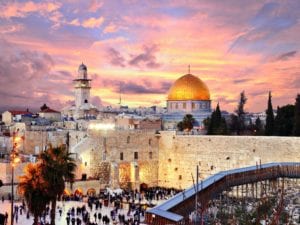 When my husband brought the up the idea that we should make aliya in late 2000, I laughed it off as  a ridiculous idea. We had 3 little kids in great Baltimore Jewish schools,  I had the job of my dreams, and we loved the kehilla we belonged to, (Rabbi Menachem Goldberger of Tiferet Yisroel in Baltimore for those who may know what an incredible rabbi and human being he is) My husband was a well respected  physician, but he abruptly retired in his 40’s because he had a neck injury. But being a clever man who knows how to turn lemons in to lemon-aid, he began a very successful new career in teaching American OB/GYN doctors how to pass board exams. He was raised in a traditional Zionistic South African (SA) home and for most of  his life his goal was to live in Israel one day.  In the late 1990’s my husband and his brothers became religious, and from SA  they were all beginning to make aliya one after the other. This greatly  inspired my husband to do the same.
My husband and I had many late night discussions about being a Jew in SA – Jews were exiting the country like crazy for all kinds reasons having to do with everything from anti-semitism to the decline in educational opportunities to spiritual limitations. He said the same would probably happen in the US, sooner rather than later.”There is no future for Jews in SA, America, or anywhere except Israel” he would say. He convinced me that America was quickly becoming morally, spiritually and financially  bankrupt. That the  kids deserve better. They deserve to live with Jewish family in their own land.

I had been and remain  a very committed and devout Jewish convert, but  I never grew up with a burning desire to live in Israel. In fact, the place was really foreign to me in every way. Having only visited once before, I was not so keen to make such a huge move, as I did not not know the language, it was so far from my family, and I found out that I would not even be able to pursue my career in Israel.Years ago I  graduated form Duke University  nurse anesthetist program. I worked as a highly respected anesthetist in Baltimore for many years, but despite this, I was told that Israel I would be unable to practice in that capacity.

But,  I had been for years unknowingly been  very positively influenced to make aliya by several chashuv (important) people and I realized that they all lived in Israel ! (see below) From each of them I learned everything from the deeper meaning of living a life in Israel to the inside story of the political situation here. It was now 2001 and the 2nd Intifada was raging on.  My husband and I realized we could commute to the US several times a year to work, we had family here in Israel, and we wanted to raise our kids in the holy land. And truthfully, we were feeling spiritually lacking , our neshomas were ready to take on more. In the final analysis, I had no reason to not make aliya, so we did- but I didn’t want to sell my house before leaving “in case” aliya didn’t work out !

We made aliya in 2001, one month before 9/11, one year before Nefesh B Nefesh. The woman who cried leaving the US and heading into an unknown land, culture and language very quickly realized that Israel is the only place for a Jew to be.  I retired  from anesthesia one year ago after travelling back and for for work for 18 years, and my husband still travels there. Because of Corona, his teaching is going more and more online. The kids grew up with a very close family; we are a family of  40 cousins, aunts and uncles here in Ramat Bet Shemesh . My kids  became fluent in Hebrew, went to all the holy sites on school trips that people out side of Israel could only dream about seeing on such a regular basis.

Now in 2020- I can tell you with all honesty it has not been such an easy road- the constant commuting was disruptive to family life, my Hebrew is still very weak and is a huge disability for me, and we had a lot of struggles with the Israeli educational system most of the time. But, my children are full fledged Israelis-  and they all made it through the Israeli  educational system with flying colors. Our girls served as bnot sherut. Our only son served in special forces in the IDF during Tzuk Eitan, and my youngest daughter married an Israeli-! We have an open house of orchim (hospitality) and have hosted literally hundreds of people from the US, SA and beyond who come to visit, and also many have used our place as a landing pad for a few weeks when they make aliya . We look after many lone soldiers weekly.  After retraining in Hebrew (not easy- paid to have lots of translation help!) I re-invented myself as a Chinese Medicine practitioner and I have a thriving practice as the nurse that does acupuncture. https://www.facebook.com/RBSAcupuncture/

The Torah learning  here is unsurpassed . I also do a monthly podcast where I interview experts on the impending Geula shalayma. (The Miriam  Project Geula Hour ) https://soundcloud.com/you/tracks

Here is the “bully” part- The one who was the skeptical olah is an aliya bully- but in a good way! Don’t let your fears hold you back from making aliya!! We need you and you belong here- You will not regret it- and you will be here to help almost 6 million fellow Jews  usher in the geula as well. I have eternal gratitude to Hakadosh Baruch Hu for giving me a husband who had the insight to do the right thing for our family, and for putting the right people in my path to show me the light of Torah of the Land of Israel.

Finally, to quote Rabbi Pinchas Winston :“We still have the opportunity. We should do it. We should take advantage of it, because later on, when we finally have clarity, about what life is truly about, we’ll understand the importance of living in the Land that our forefathers found to be so extremely important to their lives and growth and their completion – and it is to us as well. As somebody who’s made Aliyah, I can tell you personally that the experience is beyond comprehension. It’s not something you can tell somebody else who hasn’t gone through it. It’s not something that you can really share with people who are 6,000 miles away. But I will tell you that to follow that lead, to walk in the footsteps of our ancestors, but most important of all, to be in the place that God calls home? There’s nothing like it. And we have to appreciate that and take advantage of this situation while we can.”