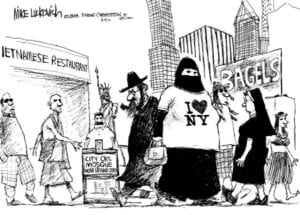 Why Mourn about Exile?

The Maharal of Prague is universally recognized as one of our greatest Sages. In his famous book, “Netzach Yisrael,” he explains that Jewish life outside of the Land of Israel is a temporary and unnatural situation of exile that has no value in and of itself, but which is rather only a state of waiting, anticipation, and preparation to return to the Land of Israel (“Netzach Yisrael,” Ch.1).

Seemingly, according to this understanding, there is no reason to fulfill the mitzvot in the Diaspora. However, we were commanded to keep the commandments in the exile, in order that we would be accustomed to them when we returned to the Land. As our Sages explained, “Although I send you out of the Land to the Diaspora, excel yourselves in fulfilling the mitzvot, so they won’t be new to you when you come back. This is similar to the parable of a king who got angry at his wife, and sent her away to live in her father’s house. The king said to her, ‘While you are there, wear your jewelry, so that when you return, the jewelry won’t be new to you.’ Thus God said to Israel. ‘My sons, distinguish yourselves in fulfilling the mitzvot, so that when you return, they won’t be new to you.’ This is what the prophet, Yirmiyahu, said as the Jews went into exile (Yirmiyahu, 31:20), ‘Set up way marks for yourself,’ these are the mitzvot that distinguish Israel in the exile’” (Sifri, Parshat Ekev 37).

On the Torah verse in the Shema, “And you shall place my words…” (D’varim, 11:18), Rashi explains, “Even after you are sent out of the Land, distinguish yourselves in fulfilling the mitzvot – lay tefillin, place mezuzot on your doorposts, in order that they won’t be new to you when you return.” This teaches that the reason for the observance of the mitzvot in the Diaspora is in order not to forget them, to insure that upon our return to Israel, we will be able to perform them in all of their details and completeness in the Land (also see Ramban, Vayikra, 18:25).

These words of our Sages are eye-opening and even staggering. Concerning the performance of the commandments in the Diaspora, the inner truth of the matter is that outside of the Land of Israel, where we are like a body without a soul, and where the Clalli, national life force of the Nation of Israel doesn’t appear, there is no essential meaning in observing the commandments. The only reason for our still keeping the precepts outside of the Land of Israel is because of our past connection to the Clalli soul of the Nation which vitalized us when we lived in our Land, and because of our connection to the future when the Clalli national soul will return and reveal itself in all of its awesome fullness, in our resurrected national life with the ingathering of the exiles to Zion. This process is already underway, as witnessed by the incredible new life force which has revitalized the Jewish People in Israel, as seen in the rebirth of the State of Israel, which has become, in a matter of decades, one of the most powerful countries in the world, as well as becoming the world center of Torah.

Once again, to explain this deep understanding, we will quote from Rabbi Moshe Bleicher’s book, “Binyan Emunah,” which I had the privilege of translating:

“The soul of the Nation and the general, national, Clalli, life force within it, is the electricity that gives life to the Torah and to its commandments. Thus, when the Nation isn’t living, when it is exiled from the Land and its organs are scattered throughout a netherworld of impure and unholy places, there is no essential value in keeping the mitzvot, and we are commanded to continue to perform them only so we don’t forget how to do them, so they won’t seem new to us when we return to our own Holy Land, where the Clalli soul comes to life with the union of the Nation and the Land.”

It is important to understand that the startling insight about the exile revealed by our Sages is not merely that the precepts practiced there are merely road signs to help us remember the way home, as indicated by the Prophet’s command, “Set up way-marks for yourselves,” but that it is possible at all to learn Torah and perform commandments in our altered and “decomposed” situation in exile, where we merely exist, without national life, like in the prophesy of the valley of lifeless bones. The ability to do so only stems from our deep, inner, historic, connection to our former, national, Clalli life as a Nation in its Land, a genetic connection which continues even in our disintegrated situation in exile.

All of our life changes when we are in exile. Not only does our Clalli soul disappear, but every detail of our life is affected. Regarding the teaching of the Gemara, “Everyone who dwells outside of the Land of Israel is like someone who has no G-d,” Rabbi Pincus HaLevi Horewitz, author of the commentary, “HaHafla’a,” writes that this is speaking about a person who observes the Torah and mitzvot in the Diaspora – but because he doesn’t live in Eretz Yisrael, he is like someone who doesn’t have a G-d. The reason behind this is that outside the Land of Israel something profoundly essential is missing – our general, national, Clalli soul.

Therefore, in the exile, Emunah (faith in Hashem) appears in an incomplete form. If Emunah was merely a philosophical and intellectual discipline, there wouldn’t be any meaningful difference between its revelation during the Galut or at the time of Geula. However, as we shall continue to explore, Emunah is not just belief in G-d, but the encounter with Divine Existence as it is revealed in our midst. Thus, during the time of exile, when the general, Clalli life-force is withheld from us, and where G-d only appears in “the four cubits of Halacha,” in the life of individuals, the entire encounter with the lofty goals of the Torah, which appear in a dynamic fashion in the national life of the Nation in our Land, is lost. It follows that the deeper levels of Emunah also are missing, and the individual Jew encounters his Maker on a shattered level, which is only a shadow of true and complete Emunah and Torah.