The Holiness of Medinat Yisrael 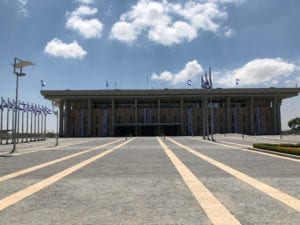 At the time of the Torah giant, the Gaon of Vilna, the Jewish People had managed to survive 1500 years of exile without the living Soul of the Nation shining in our midst. Except for the great Torah giants of each generation, the Jewish People in exile don’t recognize this living Clalli soul, or experience its powerful influence, and the life of the exiled Jew revolves around the private side of life and one’s family and personal affairs. How then, in this moribund, truncated state, is it possible to encounter the highly energized level of national life infused with Divine vitality which more truly characterizes Am Yisrael in its Land?  How is it possible to identify the sparks of Geula if one is totally alienated and disconnected from this transcendental level of existence?

Only the deeper understandings of Torah can raise us up to this lofty inner level. The learning of Emunah, in its deepest understandings, raises our aspirations and goals to those which reigned in the Nation at the time of the First Temple. Emunah is not simply the belief in G-d, but rather a deep understanding and attachment to the ways of Hashem as they appear in the world, in all of their multi-level facets and forms. Recognizing the exalted Divine goals for the world, and aligning our lives in their light, including the yearning for our national wholeness in our service of Hashem, are what enable us to recognize the sparks of Redemption. How? In his book, “Binyan Emunah,” Rabbi Moshe Bleicher explains:

The Gaon of Vilna directed his students to learn Rabbi Yehuda HaLevi’s classic treatise on Jewish Faith, “HaKuzari,” telling them that the book was “holy and pure, and that the principles of Emunah and Torah are dependent upon it.”  What is so special about this book that the giants of the world, the students of the Gra, need to learn, precisely from it? What is its great innovation?

Out of the learning of Emunah, as found in the “Kuzari,” a person encounters Am Yisrael on its highest level, along with the Divine, Clalli life force it possesses, and which is expressed in the life of the entire Nation. Thus, the student of Emunah, as it is explained in the “Kuzari,” is able to recognize the profound absence of the Clalli Divine soul in the shattered state of the Jewish People in Galut. He understands that while individual Jews can continue to survive, the Diaspora is death for the Nation. Even though we learned Torah in the exile, and there were yeshivot in large and pious Jewish communities where students studied Gemara and Halacha with great dedication, nevertheless, when our ideal, living, Clalli, life force is missing – the life force which only appears and awakens to life when the Nation dwells in its Land – when this is absent, then we are lacking the principle thing – the very soul of our life.

The Divine Unity invested in the Clalli Soul of the Nation is not merely a philosophical concept one learns from a book, but rather a living phenomenon, a Clalli life force, a unified, single MEGASOUL, a gigantic, source of energy which appears and comes into robust activation within the whole of the Jewish Nation when it lives in its Land – manifested in its general public affairs, in its government, in its economy, its military establishment, its international relationships, in all of their details, as well as its appearance in all of the mitzvot and details of the Torah – Shabbat, Tefillin, Talmud Torah, Kashrut, the Yom Tovim, and the like.   This Israelite Nation desires to live a pure and idealistic life, filled with valor and joy, with all of its powers drawing their strength from a Holy Source. When this Clalli life force is missing during our exile from our Land, it follows that all Torah study and the observance of precepts do not appear in their original and vital form, but rather in a disjointed, segmented fashion, like fingers that aren’t attached to the body. Thus, the “Kuzari” explains that in the Galut, scattered like bones all over the world, the Jewish People are not only like a body without a soul, we don’t even have a body.

A person who learns Emunah from a Clalli perspective, when he sees the revival of Israel, the awakening of myriads of Jews from all walks of life to return to Eretz Yisrael with a spirit of bravery and mesirut nefesh (the readiness to sacrifice one’s life) for the Clal, he is able to see the Clalli, Divine life-force which has returned to the Nation as a whole, and to every individual within it, and which is now raising the Nation up from the dust. In spite of all of the external trappings which appear at the beginning of the Revival, the secularism and trampling of religion by segments of the populace, the student of Emunah, as found in the teachings of the Gaon of Vilna, the “Kuzari,” and the writings of Rabbi Kook, recognizes the holy yearning for Redemption which is pushing out from within, like an infant at birth, propelling the Nation toward its true national embodiment and goal.

We tend to bestow value on Medinat Yisrael (the State of Israel) because of different external benefits, like its enabling us to learn Torah in security and peace, in our having our own independent Statehood and military prowess; or in our ability to settle and build the length and width of our Land. While these are all important, they are not the essential value of Medinat Yisrael. All of the external signs and benefits are merely expressions of a new level of life, and of the Living Soul of the Nation which has returned to manifest itself in the resurrected national body. The birth of Medinat Yisrael is the materialization and activation of its pure, holy, idealistic, and noble Clalli Soul that has returned to dwell once again in the Land, infusing the Nation with a new level of life, which has led Israel, in an amazingly short time, to be a leader amongst the nations, and which will yet fuel its climb to become the Number One superpower on Earth, both in material achievement and spiritually, in the return of prophecy and Hashem’s Presence to the world. May it be soon.

Rabbi Tzvi Yehuda HaKohen Kook, the son of Rabbi Kook, emphasized this point again and again. “The intrinsic value of the State of Israel,” he said, “is not dependent on the number of observant Jews who live here. Of course, our aspiration is that all people will embrace the Torah and the mitzvot, however, the State of Israel is holy, whatever religious level it has. It is the exalted, Divine revelation of the prayer, ‘Who returns His Divine Presence to Zion.’”