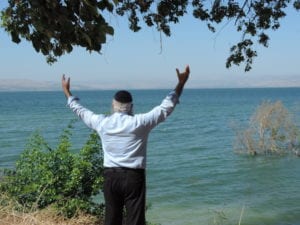 In the Gemara, in tractate Sanhedrin, there is a teaching concerning the end of the exile:

“Rabbi Abba states: There is no greater sign of the revealed end of the exile than this, as it says, ‘And you O mountains of Israel, you shall shoot forth your branches, and yield your fruit to My People, for they will soon be coming.’”

Rabbi Abba informs us that the end of the exile will be revealed in a way that everyone will see it – “There is no greater sign of the end of the exile than this.” What is this sign?  “And you O mountains of Israel, you shall shoot forth your branches, and yield your fruit to My People.” Rashi explains: “When Eretz Yisrael gives forth her fruits in abundance, then the end of exile is near, and there is no sign more revealed than this” (Sanhedrin 98A).

This teaching of Rabbi Abba needs some explanation. In describing the visible sign which marks the end of the exile, Rabbi Abba cites a verse without explaining anything further. Why did Rabbi Abba chose a verse about the fruit trees of Israel, and not something more spiritual? Why not say that everyone will recognize the end of the exile when the world is finally perfected; or when everyone will follow the Torah and its commandments; or when the Beit HaMikash will be rebuilt; or when there will be peace in Israel?

It seems strange that Rabbi Abba should chose such an ordinary sign – the growth of bananas and oranges in the Land of Israel! This is a sign of Redemption?! Is the spiritual level of Am Yisrael at the time of Redemption to be measured by the harvest of apples?  Tell us that yeshivot will be bursting with students, that Am Yisrael will do t’shuva by the thousands, and that the Mashiach will come. Instead, Rabbi Abba writes about fruit trees! What does this have to do with the exile’s end?

Once again, we will turn to Rabbi Moshe Bleicher’s eye-opening book, “Binyan Emunim.” While most of what he writes is based on the teachings of Rabbi Avraham Yitzhak HaKohen Kook and his son, Rabbi Tzvi Yehuda, Rabbi Bleicher did a wonderful job of summarizing their lofty understandings of the time of Redemption, which we are experiencing in our time.

Today, we can say, that in fact, Rabbi Abba was right. During nearly two-thousand years of exile, the Land of Israel lay barren, in desolation and ruin, and then, miraculously, upon the return of her children to her borders, Eretz Yisrael began to once again flourish, and the trees of the Land bore bushels and bushels of fruit. This is indeed a wonder! Yet, the matter still needs clarification – why such an external, down-to-earth sign to mark our Redemption? Instead of highlighting the physical rebirth of the Land, talk about the lofty spiritual level which will appear at the time of the exile’s end.

Rabbi Bleicher explains, by using the example of pregnancy:

“The period of pregnancy is a long process where the parents look forward to the birth of a baby. During this time, the wife needs more rest, assistance with regular chores, and there may even require be periods where she is bedridden. In addition to this, toward the end of the pregnancy, there are uncomfortable and often distressing pains, which are all intended to deliver the baby into the midwife’s waiting hands. And, behold, after all the expectation and waiting, a tiny creature is born, doubled over, wrinkled, crying, unable to do a single useful thing. This would seem to be a big disappointment! But, wonder of wonders – everyone is happy! Everyone congratulates the father and mother with hearty “mazel tovs!” Why such great happiness? Suppose that the mother, as in some fantasy fiction, had been raised in total seclusion and didn’t know anything about pregnancy and babies, and how children grow up. What would she do with the tiny, useless creature she just gave birth to? It could very well be that in her frustration and disappointment, she’d throw it away!

“What then is the cause of the great joy which accompanies the birth of a child? When the baby enters the world, his soul enters with him, housing his inner life force. Already, at the moment of his birth, all of his future development and growth is hidden in his being. The task of his parents and his future teachers is to believe in the greatest of his soul and his powers, and to assist them to come into active expression and to continue to develop throughout his life.

“Let’s apply this example to the teaching of Rabbi Abba. The question he is coming to answer is how will we recognize the greatness of the soul hidden inside the new ‘infant’ who will be born at the end of the exile, when the Geula begins? The Nation of Israel has been exiled for so long, it no longer remembers its original nature, or its living, Clalli Soul which illuminated it during the time of the First Temple, energizing every aspect of its national existence. For this reason, the Jewish People won’t know how to identify or recognize this new birth – the long-awaited Redemption when it begins to crystallize in the life of the Nation.

“Therefore, Rabbi Abba states that there is one sign which will be an absolute indication of the exile’s end, with no room for mistake – when the Land of Israel gives forth its fruit in abundance.”

As we have already asked, what does this mean? What spiritual value is contained in this seemingly ordinary agricultural occurrence?

Rabbi Bleicher explains that just as a mother won’t have milk for nursing unless she gives birth to a baby, the trees of the Land of Israel won’t bear their fruit in abundance unless the Redemption has begun. Eretz Yisrael has a unique holy nature which is complimentary to the holiness of Am Yisrael. The Soul of the Nation, and the true national expression of Torah, are revealed in a unique place on the globe, in the everyday, down-to-earth life of the entire Nation. This is the special nature of Eretz Yisrael – Eretz HaKodesh – in its facilitating the Divine Clalli Soul to dwell within the Israelite Nation, and thus activate the National life force needed for its Revival. When the Soul of the Nation wants to appear, Eretz Yisrael senses this awakening. Its unique spiritual radar identifies that the life force of the national Clalli Soul has emerged from its long hibernation, and the Land begins to awaken from its long slumber, which paralyzed it all the time that its children were in exile. Now, through the union of the Land and the Nation, like in the union of husband and wife, a new life begins to emerge from barrenness and desolation, seen in the physical rebirth of the Land and the giving forth of its fruits in abundance, “To My Nation Israel, for they will soon be coming.”

Thus, the revealed end of the exile which Rabbi Abba refers to is not the final stage of the rebuilding of the Beit HaMikdash, but the moment of birth, when the Nation of Israel is resurrected to life, the time when the National Soul begins to appear and generate life to the fruits of the Land, just as a new mother begins to produce milk with the birth of her baby.

When the Nation is reborn, a long and complicated process of pregnancy and labor is needed, where the inner growth is hidden from the eye until the Nation has developed sufficient organs and limbs to appear, and to once again take its place on the stage of world history as an independent Nation in its Land.

Outwardly, the newborn creature appears motley and disappointing.  At first, the Nation doesn’t call upon the Name of G-d, heresy spreads, and Judaism is mocked – just like a screaming, newborn baby is far from being the adult that he or she will become. In its beginning, the secular Zionists seem to lead the Revival, and not bearers of Torah. Nevertheless, in its inner depths, the new Nation which has arisen to Revival, carries a mighty and holy Soul which will guide the Nation through all of its contractions and pains of labor – the birth pains of Mashiach – as it sheds off the no-longer needed placenta of Galut, with all of its foreign ideologies, secular philosophies, and alien identities, until the Nation returns to its absolute holy Israelite essence.

The rebirth of the Nation of Israel after its long gestation in Galut has its own inner timetable, just as the birth of a child has its own schedule of development. The fetus develops and grows, and when the proper time comes to see the light of day, its soul pushes from within, causing contractions which are not in the mother’s control until the baby is born. However, along with the natural process of birth, which progresses with a life force of its own, independent of its parents’ involvement, we can ease the pain of the contractions by various techniques, and assist the baby as it emerges into the world. The forces of Nature play the dominant role during the infant’s incubation in the womb up to the moment of birth, when the mother pushes and strains during the birthing, and the midwife aids with her support and careful coaching from the side. The same is true regarding the birth of the Jewish Nation. The living, Clalli Soul, which pushes from deep within, is a Divine force which is not dependent on us, or on our choice of how, or when, the birth will begin. Yet, concurrent with this, in this Redemption, we are partners with G-d in the birth of the Nation. This demands from us back-breaking labor, great bravery, and the willingness of individuals to sacrifice their lives in the settlement of the Land, and in the establishment of the Jewish State.

Rabbi Abba teaches us to elevate our perspective by understanding that although the beginnings of Geula seem to be antithetical to Torah, and not what we prayed for, nonetheless, the splendor of our true Redemption is contained under the soiled garments of the crying infant we see. Working behind the scenes in the birth of the Nation is a hidden Divine Soul which the masses don’t see. Only people of deep Emunah, and an all-encompassing understanding of Torah, are able to penetrate the outer mask of the times, and see the grandeur of the hour, and thus assist the Nation in its development and growth, much like an experienced midwife who aids and guides a mother through labor and birth. In our time of Redemption, the midwives of our national Rebirth were Rabbi Avraham Yitzhak HaKohen Kook and his son, Rabbi Tzvi Yehuda. They called upon the Nation to recognize the beginnings of Redemption in the ingathering of the exiles and in the settlement of the Land, and to understand that the secular Zionists were also Hashem’s agents in a vast process of national rebirth that encompassed all the Jewish People, the entire body of Clal Yisrael, the secular and the religious alike.