Although Israel Book Week has been officially cancelled due the Coronavirus, we will hold a book fair of our own this week, by taking a glimpse at a few masterpieces of Jewish Faith. Since this week’s Torah reading describes the sin of the Spies in the wilderness, let’s start with “Eim HaBanim Semeichah,” and see what an undisputed giant of Torah has to say about the mitzvah of settling the Land of Israel today. 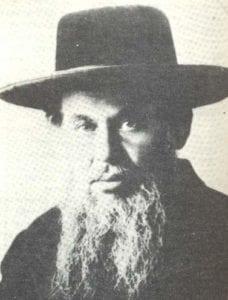 The book’s author, Rabbi Yisachar Shlomo Teichtal, was murdered in the Holocaust. A noted Rosh Yeshiva and Av Beit Din, he was one of the leaders of the Ultra-Orthodox community in Europe and a vehement anti-Zionist until the events of the Holocaust revolutionized his way of thinking. Realizing that the purpose of the unspeakable persecution was to arouse the Jewish People to return to Eretz Yisrael, he publicly admitted the error of his former beliefs and vowed to write a scholarly treatise proving that the obligation to live in the Land of Israel applied in all times. Hiding from the Nazis in an attic in Budapest, without any books at his disposal to which to refer, he wrote his powerful argument, quoting hundreds of long Torah sources by heart. Rabbi Teichtal died on a train on the way to the Mathausen concentration camp in 1945. His book, however, was kept safely hidden with a Gentile family and rescued by his children after the war.

Regarding the dire anti-Zionists, who vehemently opposed Jewish immigration to Eretz Yisrael, even in the face of the horrors of the Holocaust, Rabbi Teichtal writes:

“Those who have a predisposition on this matter will not see the truth and will not concede to our words. All of the evidence in the world will not affect them, for they are smitten with blindness, and their inner biases cause them to deny even things which are as clear as day. Who amongst is greater than the Spies? The Torah testifies that they were distinguished, righteous individuals. Nonetheless, since they were influenced by their desire for authority, they rejected the “cherished Land,” and led others astray, causing this bitter Exile, as our Sages explain. Yehoshua and Calev began to argue with them and attempted to prove the authenticity of Moshe and his Torah. Moshe’s two loyal disciples proclaimed, ‘Let us ascend at once!’ They even brought lengthy arguments and proofs to show that Israel would succeed in conquering the Land, as Rashi states. Nevertheless, they were unable to convince their adversaries, for the Spies were prejudiced by hidden motives.

“The same holds true in our times, even among Rabbis, Rebbes, and Hasidim. This one has a good rabbinical position; this one is an established Admore, and this one has a profitable business or factory, or a prestigious job which provides great satisfaction. They are afraid that their status will decline if they go to Eretz Yisrael as the Ramcal explains in Chapter 19 of “Mesillat Yesharim.” People of this sort are influenced by their deep-rooted, selfish motives to such an extent that they themselves do not realize that their prejudice speaks on their behalf. People of this sort will not be convinced to accept the truth, even if they are shown thousands of proofs from the Torah. This is what foiled the attempts of Yehoshua and Calev to disprove the evil advice of the Spies.”

On a deeper, more Kabbalistic level, Rabbi Teichtal explains how even learned Torah scholars can be caught in the sin of discouraging aliyah to Israel. He quotes the brilliant and renowned scholar, the holy Rabbi Eliyahu of Greidetz, who wrote: “Human intellect dictates that we initiate the process of redeeming the Land of Israel, and then Hashem will complete it. One must understand the great importance of this matter, for the evil forces, the kelipot, gain strength even among the most righteous individuals, in order to nullify this great good. This is the case because the entire strength of the kelipot depends on the Exile. When the exile dissolves, so will the kelipah, as the Talmud states in tractate Sukkah.”

Rabbi Teichtal continues: “This holy Jew, Rabbi Eliyahu of Greidetz, whom the author of the ‘Nefech Chayah’ calls ‘The holy rabbi who resembles an angel of the L-rd of Hosts,’ states explicitly that the reason there are tzaddikim who oppose this matter is because the kelipot have become strong within them. It entices them to nullify this great matter for which the Holy One Blessed Be He constantly longs. He longs for us to return to our forefathers’ inheritance, for every Jew has an obligation to strive to return to our Holy Land, as I will prove unequivocally from the words of our Sages. In this way, we can bring the final Redemption closer, speedily in our days, Amen.”

“The essential point is that Hashem is waiting for us to take the initiative, to yearn and long for the return to Eretz Yisrael. He does not want us to wait for Him to bring us there. When we, of our own volition, truly and with all of our strength, desire and strive to return to the Land, then G-d will bring our work to a successful end.”

Rabbi Teichel explains that since the sin of the Spies was perpetrated by the leaders of the generation, in order to rectify their sin, today’s Diaspora Rabbis and leaders must rally their congregations and constituents to come on Aliyah. They must all speak out in a clear voice that the time has come to bid farewell to foreign and come home to the Land of Israel.

“Furthermore, my brother, know that in order to rectify our ancestors’ sin, everything must be exactly as it was then. At that time, the leaders of the congregation spread evil propaganda against Eretz Yisrael. Therefore today, as well, the leaders of the congregation must propagandize for the sake of Eretz Yisrael in order to pay off their “bad debt.” They must be the first ones to open the eyes of the nation. They must explain that there is no reason for us to remain in the impure and spiritually polluted atmosphere of the Diaspora, nor to expend our energies in vain while the Gentiles rob the fruits of our labor from before our very eyes. The Jewish leaders must speak to the people in this fashion and arouse within them a fire and a spark of love for our desirable Land. This alone will make us worthy of Redemption.

“This follows the words of our mentor, the Or HaChaim. He writes that Israel’s leaders throughout the generations will be held responsible for the fact that we are still in Exile, because they should have inspired the Jews to love Eretz Yisrael. The leaders of the generation must inspire the Jewish People to help bring the Redemption closer by using the natural means that G-d has prepared for us. We are not worthy enough for it to occur with manifest miracles, rather only with miracles disguised in seemingly natural events, as in the days of Cyrus.”

“I know that the humble ones who separate themselves from the building effort do so for the sake of Heaven. They fear that they and their children may be harmed by joining people whose ways have strayed from the path of the Torah. Behold, we can say about such people that although their intentions are acceptable, their actions are not, for many reasons. But first of all, the prophet Yeshayahu said to King Chizkiyah, ‘Do as you are commanded! Why do you involve yourself with the Merciful One’s hidden matters?’ The same applies here. All Jews must be united in order to fulfill the positive commandment of the Torah to settle and build the Land. This cannot be accomplished individually. Therefore, do as you are commanded! Furthermore, no harm will come to a Jew who participates in this great and exceedingly lofty mitzvah. On the contrary, if a large number of Orthodox Jews join in, they will enhance the sanctity of the Land, as I previously cited in the name of the holy Rebbe of Gur and the Ramban. Since we are commanded to build the Land and raise it from the dust, it is forbidden to be overly pious and undermine this endeavor, G-d forbid. Rather, we must build together with whomever it may be and concentrate on enhancing the sanctity of the Land. Then Hashem will assist us.

“I have already cited our great and holy Sages who say that the light of Mashiach will shine when we build and cherish the Land. We must do precisely this and completely ignore the claims of today’s pious ones.’ We must cherish our Holy Land and sacrifice ourselves for it. This way, we will cause the light of Mashiach to shine forth, with G-d’s help, speedily in our days. Amen.

“In summation, anyone who has a brain in his head and truly believes in Hashem and His Land will let no claim in the world stop him from elevating the pride of our Land. The arguments of those who try to prevent people from building the Land are the arguments of Satan and his associates, may the Merciful One protect us from their viewpoints. This is even truer today after all that we have been through. Where are all of the Torah centers of Poland, Lithuania, and Hungary? Do we still have a portion and an inheritance here? Are we not considered strangers by the inhabitants of these lands? They have devoured our money, our bodies, and our spirituality. Thus, any intelligent and G-d fearing person will realize that there is nothing more to search for here in Exile. The time has come for all of us to return to the possession of our Forefathers. This is true and clear in accordance with the truth of the Torah, and anyone who denies it denies the truth and the Torah.”

Hope to see you here soon!