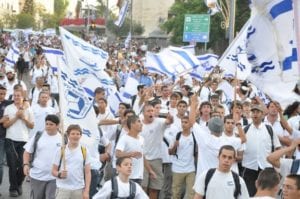 The neighborhood of Kiryat Moshe, where I live in Jerusalem, near the Mercaz Harav Yeshiva, is an interesting blend of Religious Zionists, Haredim, and Hasidim, who live in the adjoining streets of Givat Shaul. Sometimes in the morning, depending on which mikvah I go to, I daven in one of the Haredi shuls in the area. One year, after morning prayers, I said “shalom” to a Hasid acquaintance, and wished him a “Hag Samaoch” holiday greeting on the aproaching “Yom Yerushalayim” – Jerusalem Day.

“Azeh hag?” he replied in a deriding tone. “What holiday?”

“Yom Yerushalayim,” I reminded him.

“I’ll be saying Tachanun,” he assured me, referring to the daily penitential prayer which Religious Zionists omit on the joyous Yom Yerushalayim, which commemorates the conquest of the Old City and the many miracles which led to Israel’s salvation in the Six-Day War.

“A person has to thank Hashem for the kindnesses which He grants us, including returning us to Yerushalayim and the Kotel, as well as victory over enemies who swore to destroy us. Is that an insignificant thing in your eyes? After all, that’s what we’ve been praying for these last 2000 years.”

“This non-kosher Medina isn’t what I’ve been praying for,” he assured me. “Who needs your corrupt Zionist buddies and your pork-eating soldiers?”

“Tell me,” I answered. “How long do you think you’d survive in your comfortable apartment if not for those soldiers? Maybe a half hour before the Arabs would arrive to slit your throats.”

“Nonsense,” he retorted. “Before the Zionists came here, the Jews and the Arabs lived together in peace.”

“Tell the Jews of Hevron and the Old City who were slaughtered in pogroms that they were living in peace.”

“It was the Zionists who stirred up the Arabs,” he insisted.

“You know I like you,” I told him. “But you talk like a jerk. If it weren’t for the State and Tzahal, you and all of your black-frocked friends would either be dead or back in Poland by now.”

“Shtuyot!” he replied. “Nonsense. All a Jew has to do is pray and HaKodesh Baruch Hu will take care of all of his enemies.”

“I don’t mean to give you a lesson in Torah and history, but in the war against Amalek, Moshe didn’t just pray – he sent Yehoshua and hi troops into battle. When we entered the Land, we chopped up the Canaanites with our swords, not with our siddurs. And while David HaMelech left half of his troops to study and pray, he led the other half in hand-to-hand combat with the Philistines until he had slaughtered them all. He didn’t conquer Jerusalem by praying, he led his soldiers in a surprise attack through the underground tunnels of the city and chopped off as many Jebusite heads as he could.”

“Ahhh, who has time for your stories?” he answered.

“When you eat, do you just say a blessing, or do you put the food in your mouth?” I asked.

“What’s the connection?” he asked.

“And do you just pray for a livelihood, or do you go to your job and work?”

“What’s all this and your rotten Medina?” he asked.

“And if your tooth aches, G-d forbid, do you just daven, or do you go to the dentist?”

“Who can talk to you?” he said, brushing me away with his hand. “The trouble with you people is that you don’t learn Torah.”

With that he walked away.