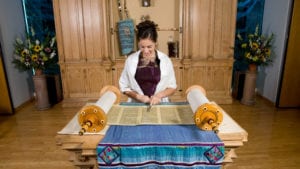 Get ready to hear the Torah explained by the greatest Torah teacher of them all – Moshe Rabeinu.

As we approach the tragic tale of the Spies in the Wilderness, coming soon in the Torah portion of “Shelach,” it is a fitting time to take a new/old look at the Torah and at its eternal truths, which are as true for our time as they were in the times of Moshe Rabeinu. That’s one of the basic principles of the Torah – it doesn’t change.

Sometimes people ask me. “Why do you waste your time trying to teach Diaspora Jews, over and over again, that the Torah is meant to be kept in the Land of Israel, rather than in Brooklyn, Boca, or Beverly Hills?”

The answer is because I love them. When you love somebody, you want the best for them. Even if you saw a total stranger about to fall off a cliff, you’d scream out to warn him – all the more so regarding someone you love.

Our Sages inform us that the roots for the Destruction of the Temple and Jerusalem were planted long before the Destruction itself, on the night the Spies in the Wilderness returned from their ill-fated mission and convinced the Jewish People not to journey on to live in the Promised Land. That night was the 9th of Av. Their rejection of the Land of Israel was the rotten foundation which brought about our later National Destruction as an independent Nation in our own Land.

Afterwards, stripped of our own Jewish Land and Israeli Nationhood, we became minorities in foreign lands. Up until the Destruction, the religion of the Jewish People was the Torah, a combination of Divine laws and commandments that covered our individuals lives AND the life of the JEWISH NATION, laws concerning the Israelite king, the Sanhedrin, the army of Israel, prophecy, the Beit HaMikdash, national sacrifices, and the agricultural laws unique to The Holy Land. But when we were cast out of our Land, the Torah lost its earthy component, and our physical Nationhood ceased. Instead of being the Divine Constitution of our NATION, the Torah was reduced to moral teachings and a handful of individual commandments, like the bones of a large salmon at the end of the Shabbos morning Kiddush. That’s when “Judaism” started. Stripped of our own Land, and Israelite monarchy, our own JEWISH NATIONHOOD was lost. Exiled in other peoples’ countries, we were left with the few ritual precepts that we could still perform, like putting on tefillin, keeping kosher, learning Torah, and observing the Sabbath. Instead of being our NATIONAL CONSTITUTION, the Torah was truncated into being just a religion without its many fundamental NATIONAL, POLITICAL, and GEOGRAPHIC obligations and demands.

For example, a gentile can be a Buddhist or Christian anywhere he wants. The Pope lives in the Vatican, but there is no obligation for any other Christian or Catholic to live there. The same holds true for Islam, Buddhism, of Hinduism. These are religions, period, with a division between church and state. Not so with Torah. The Torah encompasses the entire life of the Jewish People, the religious and NATIONAL as well. But when we were severed from our earthy base, the Land of Israel, where Hashem wants us to established the NATIONHOOD of ISRAEL, we were left with a truncated “Judaism” – the religious rituals of the exiled tribe of Judah, which could still be practiced in galut, but without the Torah’s DIVINE NATIONAL FORMAT and NATIONAL LAWS. Instead of being a NATION, a CLAL, we became scattered individuals in foreign gentile lands.

This is what the Spies failed to understand. Even though they were respected Torah scholars and the heads of the tribes, they wanted to make do with exile “Judaism” alone, content with just the personal precepts, without the hassle and danger of conquering and settling the Land. And this same misunderstanding has continued to this day, when you can still find many people, Torah communities amongst them, who just want to observe a handful of individual precepts in the wilderness of foreign lands, without having to worry about the hassle of settling the Land of Israel and fighting for it in order to keep it under Jewish sovereignty as the Torah commands.

This is why, as we were about to enter the Promised Land, at the beginning of the Book of Devarim, Moshe had to go over the teachings of the Torah. The Spies and their rebellious generation had all died in punishment for not wanting to make aliyah, but the pernicious influence of their tragic misunderstanding still remained. So at the very beginning of their continuing journey, Moshe begins to explain the Torah, as it says, “Moshe began to explain the Torah….” (Devarim, 1:6).

Rashi comments that Moshe explained the Torah in 70 languages. Apparently, he prophetically knew that the Jews would one day be scattered around the world, where they would speak French and Spanish and German and Russian and English and Yiddish, and Moshe didn’t want them to have the excuse, “We didn’t know we were supposed to live in Israel – we don’t speak Hebrew, so how can you blame us for not understanding the Torah?” So Moshe made sure to teach the Torah in 70 languages, so that every Jew would know.

And what is the very first thing Moshe teaches the Nation, who are all waiting to hear the explanation of the Torah from Moshe himself? You can read the words yourself:

“Moshe began to explain the Torah, saying, the Lord our God spoke to us in Horev, saying, ‘You have dwelt long enough in this mountain – TURN AND TAKE UP YOUR JOURNEY – go to the Land of Israel! BEHOLD, I HAVE SET THE LAND BEFORE YOU, GO IN AND POSSESS THE LAND THAT THE LORD SWORE TO YOUR FATHERS, AVRAHAM, YITZHAK, AND YAACOV, TO GIVE THEM, and, TO THEIR SEED AFTER THEM” (Devarim, 1:6-8).

The Torah wasn’t given to be kept in Sinai, nor in Brooklyn or Beverly Hills. The Torah isn’t a “religion” like Buddhism or Christianity, God forbid. The Torah isn’t some abstract spirituality floating like cloud in the sky. The Torah has an EARTHLY BASE. Not Sinai. Not Brooklyn. The Torah is the DIVINE CONSTITUTION of the NATION OF ISRAEL, and every NATION needs its own LAND. And the holy CHILDREN OF ISRAEL have their own unique HOLY LAND.

What is the first and fundamental message that Moshe explains when he teaches the Torah to Am Yisrael? Not Shabbos. Not kashrus. You want to know what Torah is? You want to keep it? GO IN AND POSSESS THE LAND! That’s the basis of Torah.

This is the teaching which Moshe wanted to sink into our skulls and our hearts in order to uproot the tragic error of the Spies. We are to be our own HOLY NATION with our own HOLY LAND, and not live as a minority in someone else’s country performing a handful of religious precepts. That may be the “Judaism” of the exile, Diasporism, but it isn’t real Torah.

What is this like? It’s like a Jew who returns home from shul on a clear Sukkot night and eats his Yom Tov meal in his home under the roof of his house. Obviously, he hasn’t performed the mitzvah. Why? Because there is a place where the seudah of Sukkah night must be performed. The same thing is true with the Torah.

You don’t have to listen to me. Listen to Moshe. Listen to the roaring echo of his words, resounding out today over the blackened, Corona-filled skies of America:

YOU HAVE DWELT LONG ENOUGH IN BROOKLYN AND BEVERLY HILLS – GO IN AND POSSESS THE LAND!!!!