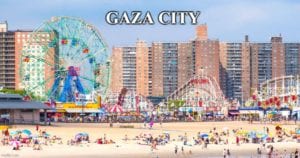 As Tisha B’Av approaches, I confess that my essays often chastise Jews who prefer to live in the Gentile lands of the Diaspora, just like the Spies in the Wilderness who refused to accept the oft-repeated commandment to make Aliyah. I am not speaking about the many Jews who would sincerely like to move to the Promised Land, but who can’t at the moment for whatever justifiable reason. Nor am I speaking about the millions of assimilated Jews in the Diaspora who are so alienated from Judaism that they don’t even know what a commandment is. Rather, my criticism is directed at the Haredi and Modern Orthodox communities who know that Hashem wants the Children of Israel to dwell in the Holy Land, who hear the loud-and-clear call in the weekly Torah reading in shul and in the words of the Haftorah, but who turn their backs on the mitzvah, pretending it no longer applies in our time, or that it can only be performed with the arrival of Mashiach, even though the Almighty Himself hasn’t bothered to wait for Mashiach in rebuilding a the Israelite Nation in Zion, in a clearly miraculous fashion via the ingathering of millions of Jews and the incredible growth of the Medinat Yisrael in all spheres, including it being the Torah center of the world with more Torah institutions than in every other place combined. But these Haredi and Modern Orthodox Jews don’t agree with the way that the Almighty is handling things, so they remain in Gentile countries supposedly waiting for Mashiach, while condemning me for senseless hatred when, in fact, my essays are penned out of gratuitous love, with the holy intention of waking them up to their blindness and chronic hearing impairment, as the verse of Isaiah says: “Hear O you deaf, and look O you blind, that you may see! For who has been so blind as My servant, so deaf as My messenger?”

To justify their lingering in Galut, they criticize Israel for a thousand different shortcomings and sins – that the police beat Haredim on their heads like the Nazis once beat up the Jews; that the Bolshevik government force yeshiva boys to serve in the army; that the unholy anti-Torah regime destroys Jewish settlements and permits gay parades; that anarchists trip off their clothes on the streets of Jerusalem, on and on and on, just like the Spies criticized the Land of Israel because of the fierce giants who lived there.

Well, my friends, I have a little news for you  – if those nearly half million “Orthodox” Jews would abandon the land of Mickey Mouse, Donald Duck, and Batman, and come home to live in the Land of Avraham, Yitzhak, and Yaacov, things would be very different in Israel. For one thing, in a matter of years, the religious would have a majority in the Knesset. What fun we would have passing all kinds of laws. No more driving on Shabbat. No more chopping up the Holy Land into pieces. No more leftist newspapers and secular TV. Part of police training would be a two-year program of study in yeshiva in order to know how to enforce the Torah’s laws. With a mass Aliyah of a half-million Orthodox Jews, the Arabs would flee the country of their own accord. We could turn Gaza into a Haredi paradise by the sea. We could even buy the Coney Island Wonder Wheel and Cyclone, and transport them to Gaza to make Brooklyn Jews feel at home – and build them a wooden Boardwalk by the sea to remind them of nostalgic days in the Old Country.

Yes, my friends, the State of Israel has shortcomings which need to be mended, but the reason that Israel has problems is because hundreds of thousands of religious Jews still insist in living in foreign Gentile lands. Don’t ask me why. I can’t figure it out. Who would want to live in Brooklyn when he or she could live in Jerusalem? It’s absolutely crazy. Instead of complaining in Brooklyn and Lakewood, and their Five Town communities and South Florida condominiums, let them come and lend a helping hand. But no. They’re too holy. Believe me, it breaks my heart how blind and deaf they can be. I love them. I want to help them. They don’t listen, but I won’t give up. I know that they are merely confused and wayward children. One day soon, whomever is left will come home.