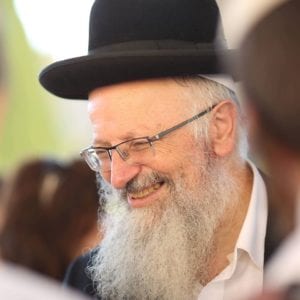 In his weekly, televised class on the Parsha, HaRav Shmuel Eliahu, Chief Rabbi of Tzfat, emphasized the importance of declaring the praises of Eretz Yisrael in rectifying the sin of the Spies who spoke disparagingly about the Cherished Land, a shortcoming still prevalent today. Here is a capsule summary of some of the major points of the shiur:

HaRav Yosef Caro explains that Moshe sent the Spies to tour the Land of Israel in order that they return full of its praises and thus ignite a passionate yearning for the Land throughout the Nation. This loving fire in their hearts for the Promised Land would then burn away all impurity remaining from the sin of the Golden Calf, making them worthy of entering and conquering the exalted Holy Land.

In the book, “Eim HaBanim Semeicha,” HaRav Yisachar Shlomo Teichtal teaches that just as the Spies went from tent to tent, spreading negative propaganda about the Land of Israel, so we must follow their example – in order to rectify their transgression, we have to do the counter action of going house to house, shul to shul, community to community, speaking in praise of the Land to inspire Jews to yearn to dwell there.

There are people who say that they live in the Diaspora because transgressors abound in Eretz Yisrael, but they are mistaken. The holy Kabbalist, HaRav Avraham Azuli, author of, “Chesed L’Avraham,” wrote: “Everyone who dwells in the Land of Israel is called a Tzaddik, even if they don’t seem to be outwardly, and even if they act in an evil manner, for if they weren’t Tzaddikim, the Land would vomit them out, as the Torah testifies, “The Land will vomit out its inhabitants….”

In a similar light, HaRav Teichtal cites that the Spies rebelled against the command to enter the Land, maintaining that the Nation would lose the high spiritual level it had achieved in the wilderness where they were free of all worldly burdens and could learn Torah from Moshe Rabanu himself day and night. This reasoning if still heard today, with the claim that Jewish education of children would suffer if a family moved to Israel. But the facts are very different. 20% of the children in Israel learn in the dati-leumi school system, and 20% in Haredi institutions. There are some 130 high-school yeshivot with approximately 38,000 students. Close to 170,000 students learn in yeshivot and 72 Hesder programs, 38,000 in 390 yeshivot gedolot, and there are more than 1,250 Kollels with close to 90,000 Avrechim. One should also not deny children the opportunity to learn in the special air of Eretz Yisrael which grants wisdom, producing great Torah Scholars, and more per-capita Nobel Prize winners than in any other country.

The Spies maintained that the Children of Israel should remain in the wilderness because it was dangerous to enter Eretz Yisrael. This reasoning continued to be heard throughout the generations. However, in the Shulchan Aruch, in the Pitchei Tshuva, (Even HaEzer, 75:6), we find that all of the Poskim, HaRishonim and HaAchronim, maintained that the mitzvah of Yishuv HaAretz applies in all times, and that if merchants travel there on business, then the argument of danger does not apply. In our day, just a year ago, over 5 million foreign tourists visited Jerusalem alone without the fear of danger. How much less does the argument of danger apply when talking about Aliyah and the Torah commandment for a Jew to dwell in the Land of Israel!

When Yehoshua and Calev told the Nation, “The Land is an exceedingly good land,” the people wanted to stone them. King David explained that the sin of the Spies was in rejecting the good and spacious Land that Hashem bequeathed to the Children of Israel: “They despised the cherished Land; they did not believe His word, but murmured in their tents, and did not hearken to the voice of the L-rd,” (Tehillim, 106:24). Two years ago, I met a group of visiting students from Mexico who were studying in a Jerusalem yeshiva. When I asked them why they were going back to Mexico, they answered that it was hard to make a livelihood in Israel. They said that many Israeli shlichim came to Mexico seeking charity for yeshivot and other causes because things were difficult in Israel. I should have rendered my garment at that moment because the truth is the opposite. That year, the average income in Mexico was a little less than $20,000 per year, while in Israel the figure was double. At the time, Israel had the third most stable economy in world, but when people want to justify their weaknesses, they come up with all sorts of wild imaginations.

There are absolutely no justifiable reasons to settle outside the Land of Israel. Our Sages teach that the mitzvah to dwell in Eretz Yisrael is equal in weight to all of the commandments of the Torah together. A person who lives in Israel fulfills the mitzvah every second, even when sleeping. My Father, HaRav, of blessed memory, said that the very first commandment a bar mitzvah boy performs is Yishuv HaAretz, because just by being here, he carries out the Torah precept, which the Ramban, and all of the Torah authorities before and after him decreed that it is a Torah commandment in all times, even during the time of Exile, as we mentioned earlier in reference to the Pitchei Tshuva in the Shulchan Aruch.