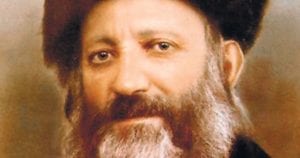 This isn’t me. It’s Rabbi Kook. He wrote this open letter, which he named, “The Great Call,” to world Jewry in 1907 when the Turks ruled the Land of Israel, when travel was difficult, when livelihood was sparse, before there was a Jewish airline, and a thriving Israeli economy, a powerful Israeli army, Nefesh B’ Nefesh, Torah institutions all over the Land, modern apartment buildings and villas, and excellent health care. Rabbi Kook passed away on the 3rd day of Elul in 1935. On his gravestone, the date of his arrival in Jerusalem is marked, the 28th day of Iyar, signifying that this was indeed the highest joy of his life.

“TO THE LAND OF ISRAEL, Gentlemen, To the Land of Israel! Let us utter this appeal in one voice, in a great and never-ending cry.

“Escape with your lives and come to Israel; G-d’s voice beckons us; His hand is outstretched to us; His spirit within our hearts unites us, encourages us and obliges us all to cry in a great, powerful and awesome voice: Brothers! Children of Israel, beloved and dear brethren, come to the Land of Israel, do not tarry with arrangements and official matters; rescue yourselves, gather, come to the Land of Israel…

“From the time we were exiled from our Land, the Torah has accompanied Israel into exile, wandering from Babylon to France, Spain, Germany, Eastern and Central Europe, Poland, Russia, and elsewhere. And now, how happy we would be if we were able to say that she has returned to her first place, to the Land of Israel, together with the people of Israel, which continues to multiply in the Holy Land.

“And now, who is so blind that he does not see the L-rd’s hand guiding us in this, and does not feel obligated to work along with G-d? A heavenly voice in the future will cry aloud on top of the mountains and say, ‘Whoever has wrought with G-d, let him come and receive his reward.’ Who can exempt himself from doing his part in bringing additional blessing and swifter salvation; from awakening many hearts to return to the Holy Land, to the L-rd’s legacy, that they may become a part of it, to settle it with enterprises and buildings, to purchase property, to plant and sow, to do everything necessary for the foundation of life of a stable and organized settlement….”

Another public proclamation was addressed to Orthodox communities to urge their Aliyah to Israel. In establishing a movement called “The Banner of Jerusalem,” Rabbi Kook called upon all religious Jews to come to Israel to rebuild the nation’s spiritual life, just as the secular Zionists were rebuilding the physical:

“Jews! We call you to the sacred task of building our Jewish nation in our Holy Land, in Eretz Yisrael. Come to us, rally together under the “Banner of Jerusalem” which we now raise aloft before the whole Jewish religious public.

“We all know the ‘Banner of Zion’ which unites a certain portion of our brethren on the basis of our Jewish secular interests in the Land of Israel. But there are many who have not joined the union of those who bear the Zionist flag, and a great many who feel it impossible to do so. We simply record the plain fact that this is so, without questioning its veracity.

“Yet it cannot be that the largest, most natural, and earnest portion of Jewry, the majority of the Jewish religious public, should remain indifferent to the wonderful events of the present, and not lend a hand in the holy task of building our nation on our sacred soil because of so-called objections….

“Jews, all the loyal believers in the Jewish faith, there can be no doubt that the Divine power is now manifesting itself in us amidst the great world events. We are certainly called to return to our ancient home in the Land of Israel, there to renew our ancient holy life….

“We religious Jews must all profoundly know and believe that the Divine hand is now leading us openly to our high, ideal destiny. We must make known to the whole world, the true meaning of the present wondrous happenings, whose purpose is so clearly the hastening of our redemption and salvation, from which alone will also spring forth the redemption and salvation of all mankind.

“With the flaming, illuminating, Divine faith, with all the luster of our holy Torah, with the vitality of all of the most refined and devout Jews, we shall carry our flag, the ‘Banner of Jerusalem’ by which alone the ‘Banner of Zion’ will also be properly hoisted. For the value of Jewish secular power will be elucidated to the world only in the light of our holy Jewish spiritual power, emphasized by the uplifted voices of the whole religious Jewish world community, setting with holy enthusiasm to the task of our national construction, of our return to the Land of Israel, by the grace of the Divine and illuminating light, O House of Jacob, come, and let us walk in the light of the L-rd.”