You Wept in Vain 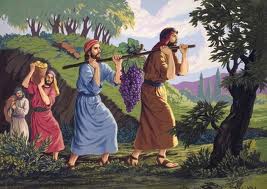 Based on chapter Shelach, in Eretz Yisroel in the Parsha , by Rabbi Moshe Lichtman, Devorah Publishing 2006

Chazal  have a tradition that the sin of the spies took place on the ninth of Av and on that night, Hashem told the people of Israel, “You wept in vain”, I will establish for you weeping for all generations. The Mishna taanit 4:6 lists 5 tragic events that occurred on Tish B Av including the destruction of both Temples. The first tragedy was the episode of the spies, who were sent by Moses on a mission to scout the land for possible points of entry.  Through distorted lenses, the spies  gave over false reports about the land of Israel.   The false and negative  reports made the people  lose faith in Moses and GD and because of this, the incident makes it the source of all troubles for the Jewish people throughout history. The incident is actually known as the sin of the spies.

What was this sin, and how will learning about this help us understand kind how this distorted thinking of  spies help us avoid a recurrence today? The people of the desert  actually committed 2 sins: slandering Eretz Yisroel and also despising the land.

Although the spies were the gadolim (greats) of the generation, only 2 of them  (Calev and Yoshua) , were able to come back with positive reports. Ten out of twelve of them reported back tales of woe and  predictions of destruction and defeat. When they saw how the  giants who inhabited the land were busy burying their dead, they exclaimed “eretz ochelet yoshveya” “This land devours the inhabitants” . We learn that Hashem intentionally arranged the giant’s deaths to distract them from noticing the spies. One of many examples of a gift from Gd that is misconstrued as misfortune . And as we learned, none of the males  of generation in the desert ever actually made it into the land, even after being punished by wandering in the desert for 40 years. Chazal say that loshon hara (evil speech) of the land is worse than loshen hara about a person.  Like Calev  and Yoshua, it is not enough to refrain from bad mouthing of Eretz Yisroel , one cannot stand idly by when others do it. We must never put down the people or the way of life in Israel, and we must object when others do! (Torah Tidbits)

On the tour of the land, the spies saw exactly what they wanted to see : a real place, seemingly governed by natural laws, where people live and die. A beautiful land, with extraordinary produce, yet one which looked like a regular country with houses, roads, fields, forests and mountains. In reality the law of this land is totally beyond nature. It is a land that Hashem cares about constantly, “the “eyes” of Hashem your Gd are on it from the beginning of the year to the end of the year”. Devarim (Deuteronomy)11:12

Despising the land is an issue that arises in every generation, and it continues to happen today . We know that it can be a difficult  place to be at times, just as the spies knew . As some say- everything in Israel is hot- the temperature, tempers, politics, and more. We olim (immigrants) struggle with a new language, culture, lack of parnassa (livelihood) , and lack family support in many cases. But our love of the land is intrinsic, so if ever we hear someone say that actually hate it here, we have to know that it has so much to do with their perception of themselves.  Seeing the land from a negative place can come from  lack of emuna,(faith) and also fear and doubt that Hashem will protect us . And, like the spies, this will make a person wrongly conclude that this land is so bad that it is even toxic. This is no more than a reflection  of one’s own agenda. Moreover, the spies back then, and even people today convince themselves  that they can serve Gd better in the desert, or outside of Israel. However, we are told by our sages that the only way one can actualize his or her Jewish neshoma (soul) to the fullest is here in Eretz Israel.

Time has come for our people to recognize the land of Israel in an extraordinary light. We must recognize the uniqueness of the land and realize that we are living through very special times – Even when things go wrong here, and cannot be ignored-  we must look beyond the surface and be thankful that we live in the generation that is privileged to see so many prophesies of redemption before  our very eyes. According the Rabbi Lichtman, “we are a segula (treasured) generation returning to the segula land after 2000 years of exile”. How is it that  we continue to ignore this fact and continue to dwell  on foreign soil  because it is easier to live there?” Rabbi Yaakov Emden also said “those who do not intend to settle down  in the holy land of Israel Gd forbid, are repeating our ancestors’ sin; despising the desirable land which caused  us eternal weeping.  And this sin has stood against us throughout our bitter exile. Not just one enemy has risen up against us , but peace and tranquility have eluded us in every generation.”

Hashem promised us a land of our own, one which will bring us ever closer to  a worldwide redemption . We are witnessing the ingathering of the exiles and we may very well witness the building the third Beis Hamigdash (Third Holy Temple in Jerusalem) in our lifetime.  This is what the  spies should have focused on. This is what we in our time can focus on too.  Stop the weeping and help bring about the ultimate redemption. Come home. Make aliya .