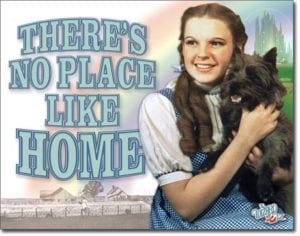 When a Jew starts looking into making aliyah, they can get completely overwhelmed by all the logistical issues that pop up. Our brains are flooded with questions like:

• What the heck is an apostille and how did I get to this age without ever hearing of it?
• How did I accumulate so much stuff and how am I going to decide what to take and what to leave behind?
• How can I choose a community that will be a good fit if I’ve never lived in Israel?
• How will I make a living?
• How do I transfer my money to Israel without losing a ton on the exchange rate?

These are important questions that have to be dealt with and they can overwhelm. My advice is to keep a master notebook or computer file with all the information on the many topics you’ll need to address. For example, when we made aliyah, I created a spreadsheet for all the companies we were doing business with and whether I needed to cancel service, change our address or take some other action.

All these are legitimate aspects of making aliyah, but there’s so much more to it. There’s a whole new mindset that happens when a Jew moves to Israel, and that’s what I really want to talk about here.

Aliyah requires a total paradigm shift. There are 6.7 million Jews living here, including a few hundred thousand olim from the US. It absolutely is possible to make it in Israel, if you adjust your expectations and don’t try to recreate your American life here.

I’ve identified four important paradigm shifts that are important for a successful klita. These aren’t meant to be all-encompassing, but rather to introduce prospective olim to the idea that you aren’t just changing addresses.

You’re being called upon to change your mindset.

The Certainty Mindset
In America, I made decisions with a certain degree of certainty about the outcome. In Israel, the spiritual reality is different. Here, I learned that there are an infinite number of variables that we can’t control. In Israel, I learned to dial down my sense of control, in a way for which life in America did not prepare me.

Living in Israel, one experiences hashgacha pratit in a much more open manner. Doors open. Seemingly serendipitous meetings end up being deeply significant. Opportunities present themselves when we are least prepared. If you ask them, many olim will tell you that life got a lot easier once they relaxed into the flow, let Hashem run the show and stopped trying to manage everything.

This in no way means that we are not obligated to do our hishtadlut. We absolutely are obligated. My point is that, for those whose eyes are open, life in Israel makes it abundantly clear Who is running the world.

The Spreadsheet Mindset
When considering making aliyah, it’s natural to wonder how you’re going to make a living. You may have tried to plan everything out on a spreadsheet.

It’s true that some things in Israel cost significantly more than they do in the US and, unless you’re a Member of Knesset or high-tech CEO, salaries are generally significantly lower here. It’s also true that some of the major expenses Orthodox Jews have in America, like tuition and health care, are negligible in Israel.

Israel has a public transportation culture. People from every strata of society use public buses, light rails and trains. That’s a huge paradigm shift for those coming from suburban America.

If you’re going to try to plot everything out on a spreadsheet, you may feel discouraged about your ability to make it financially. There is absolutely a certain amount of emunah necessary to thrive in Israel. And it’s important to remember that the same Hashem Who provides your parnassa wherever you are now is also overseeing things here.

A combination of emuna, tefillah and hishtadlut go a long way toward making a successful life in Israel.

The Shopping Mindset
Life in Israel is, for most of us, materially simpler than it was in America. We live in smaller spaces. We own fewer things. We dress more casually. We put more of an emphasis on experiences over acquisitions.

One thing that struck me is that in Israel, there are hardly any billboards. Traveling on highways in America feels like a constant assault on your pocket – Eat here! Shop here! Stay here! Buy this! Those kinds of messages are virtually absent in Israel.

In addition, though we have IKEA, we don’t have WalMart and Target or other one-stop department stores. We have indoor malls, but overall, shopping definitely requires more effort here which, in my opinion, reduces the tendency to engage in recreational shopping.

After they’ve been here for a few years, many American olim will tell you that the two things they miss most about America are their families… and the ease of shopping. (I lied. We also miss decent kosher Chinese food.) Yet, we adapt and learn to shop differently.

The Eretz Yisrael Mindset
I became religious when I was in my 20s in America. To me, Jewish life was about me, Hashem, the Torah and only a little bit about what my community called klal Yisroel. After living in Israel for some time, I realized that my understanding of what it means to be a Torah Jew had been grossly deficient.

I had completely missed the entire nationhood part of being a Jew. It’s all over Tanach, but I didn’t experience it until I lived in Israel.

Many years ago, when I lived and worked in America, I came to the realization that my Catholic secretary got all her holidays off because they were Federal holidays. I took vacation days for all the chagim.

In Israel, we live within the Jewish calendar. There are public chometz burnings and the municipalities collect schach after Sukkot. The foods on display in the grocery stores and the bakeries match the upcoming holiday. The public buses and the bottles of Coke wish you a Chag Sameach.

Although, due to our many sins, we yet lack a Temple on Har HaBayit, life in Israel already operates on Jewish time. Olim are aware of being part of a national destiny, of a Biblical story.

In a few months, we will celebrate our tenth aliyahversary. I’m not suggesting that it has been smooth sailing every moment. We’ve had our challenges. Of course we have.

But once we made some of these paradigm shifts, once we accepted the reality that we live in the Middle East (“Toto, I’ve a feeling we’re not in Kansas anymore.”), the unbelievable richness of living a Jewish life in Israel began to accrue.

I wish nothing less for you.